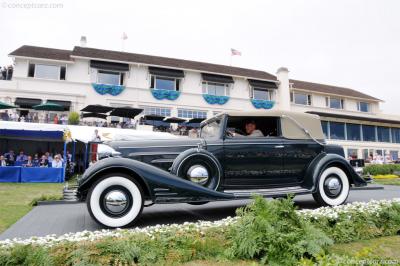 The Great Depression lumbered on through 1933. Sales of V-16’s for the three model years 1930 to 1932 had been an impressive 3,551 units. Lawrence Fisher, president of the Cadillac Motor Division announced a sales goal of 400 units for 1933. At the end of the production run only 126 had been sold as 1933 proved to be the trough of the Great Depression. Unemployment in 1933 reached 25%. People were either unemployed or extremely conservative with their resources, reducing the demand for luxury automobiles. Cadillac V-16 sales for the four model years 1934 – 1937 were only 212 units and sales for the final three model years 1938 – 1940 were 498 units. In retrospect 1933 was the last hurrah.

V-16's were built on a 149” wheel base, had the Vee-shaped grille/radiator shell, skirted fenders, and no-draft ventilation common to the full line. Detail distinction was achieved with a new, winged goddess mascot; large, spinner hub caps; absence of crankhole cover in the grill; and an awkward, four-bar bumper. Hood side panels carried two vertical doors plus three stylized horizontal louvers. Vertical louvers on front fender skirts, shown in promotional literature and used on mockups, were replaced in "production" by three horizontal louvers matching the hood louvers.

Mechanical changes from prior years’ models were few. A higher compression ratio was available to utilize improved gasolines. Except on early production, wheel size was reduced from 18" to 17". Although the engine was rated at 165hp, it is estimated that its true output was closer to 200hp. The car on display was originally owed by actor Robert Montgomery